Disney and Pixar’s Luca, brings us along the Italian Riviera on an adventurous journey. Does this latest film live up to the Pixar standard? Is Luca kid-friendly? I’m breaking down all of the thematic elements, including its PG rating, in my Luca Parents Guide and Movie Review. Here’s what parents need to know to help YOU decide if it’s appropriate for kids. As always, no spoilers!

Pixar’s Luca debuts straight to Disney+, no Premiere Access required, it is included with your Disney Plus subscription. This was surprising to me given the popularity of Premiere Access with its latest films like Cruella and Raya and the Last Dragon. However, I think families will appreciate this immediate push to Disney+, but I’m still shocked it isn’t even in theaters.

With that being said, Luca is a delight. It is such a bright and happy film that is so full of life. The amount of takeaways from this movie and the topics it covers is incredible. I think a lot of people will be nodding their head along while watching.

I will be honest, Luca definitely has some strong Little Mermaid vibes. Luca’s mom, Daniela, even reminded me a bit of King Tritan…except she was a bit more gentle and kind. And there was even some similarities to Finding Nemo. Luca’s Uncle Ugo has a strong resemblance to the scary barracuda in that movie.

So is Luca really just a mishmash of Little Mermaid and Finding Nemo? While there are definitely some of the same elements, I’m going to say no. Luca does branch out and deliver its own solid story. There is so much more than Luca being curious about the world above the surface. Luca is a story of friendship. It’s a story of love, of life lessons, and being true to yourself. 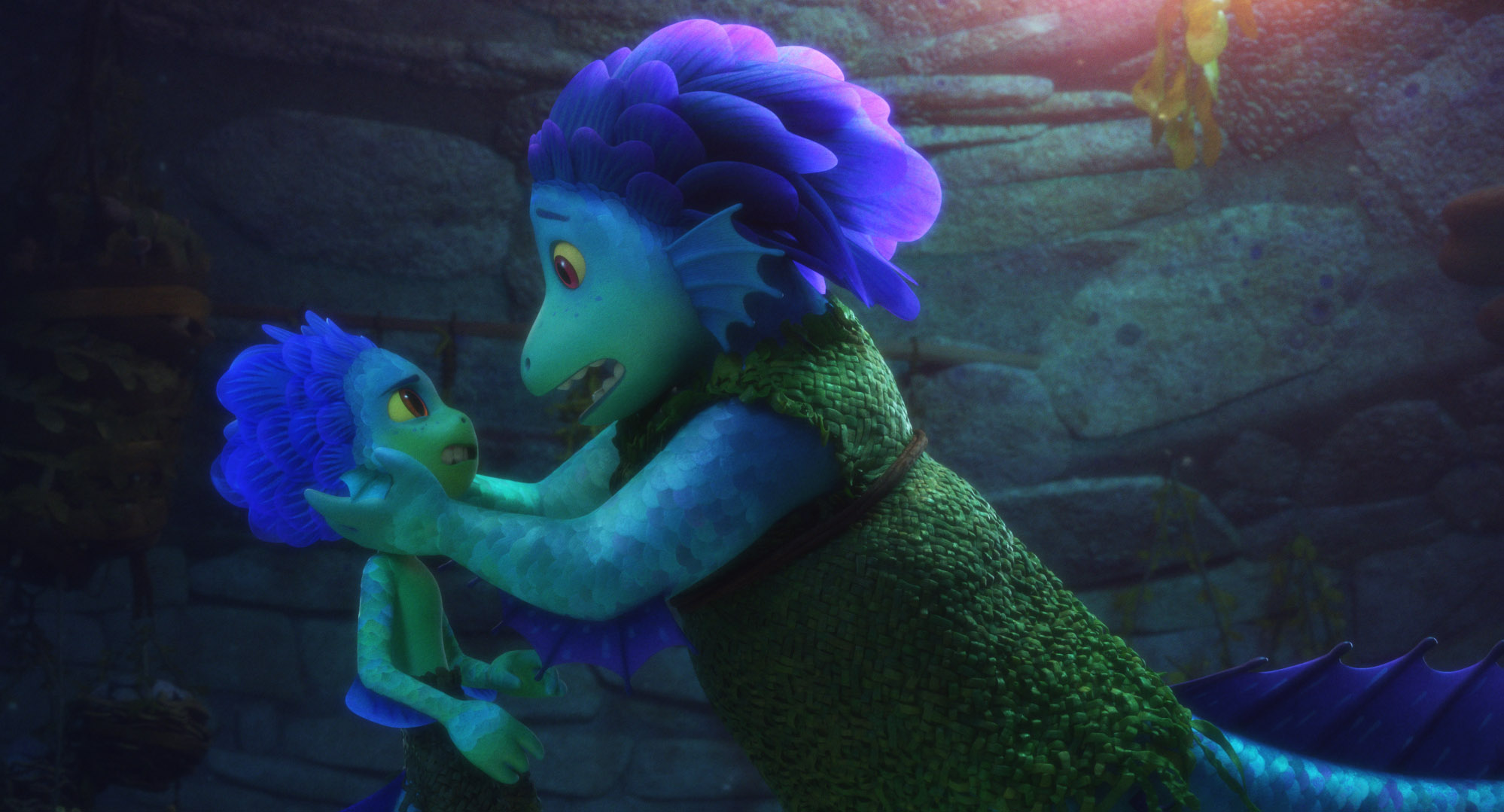 The Italian Riviera looks pretty darn good in CGI. From the rippling waters, to the Italian village, and even the scales on the sea monsters, Luca is a visual masterpiece. The vibrant colors are captivating and even the sky is painted in perfection. You can almost taste the gelato, and I can guarantee your kids will be asking for a Vespa. Pixar blows the animation out of the water (pun intended).

Like most Pixar films, Luca is packed full of life lessons and teachable moments. Is Luca comparable to Toy Story, UP, or Soul? No. But that doesn’t mean it’s not good. It’s just not to that level. Luca holds its own and provides relatable content.

Luca is a story about friendship, and it is done eloquently. As a mom of two boys, it’s endearing to see a strong friendship between them. Luca and Alberto truly love and care for each other. We often don’t see boys have this type of friendship in movies. It’s completely cliché, but it’s usually always shown with girls. Boys need this type of story too, and Luca gives them just that.

Oh my goodness, I love how Luca’s mom, Daniela, is such a mama bear! She loves her boy something fierce, and she will do anything to keep him safe. I felt I was able to truly connect to her character. I think it’s important that as much as Daniela wishes to protect Luca, she realizes that for him to grow, she might need to step back a bit. As parents, watching our children grow and allowing them to make their own mistakes and discover the world on their own is HARD. But at the same time, it’s beautiful. It’s life. This is what they’re supposed to do.

Who would ever have thought a movie about sea monsters would advocate diversity?! But it’s 2021 y’all, and we are HERE FOR IT! We see multigenerational families. Another family has parents that are separated. There is even a character with a physical disability — which to be honest with you, I didn’t even notice at first glance because this character is incredibly capable. As someone who uses a wheelchair, I applaud Pixar for this inclusion. I LOVED that I didn’t even recognize the disability immediately. I think it’s incredibly important for all abilities to be represented on screen. There is not one size fits all. People come in all sorts of different shapes and sizes. We should be celebrating those differences. They’re what make us who we are! One of my favorite quotes in Luca is when Grandma Paguro says, “Some people, they’ll never accept him. But some will.” Mic drop.

A coming of age fantasy film about a sea monster who wishes to explore the world, is Luca okay for kids? Here’s what parents need to know before watching Disney’s latest movie.

Luca has an MPAA rating of PG for rude humor, language, and brief violence. It has a runtime of 1 hour 35 minutes. Just how much language are we talking about, and is the brief violence too scary? Let’s breakdown the thematic elements and take a closer look.

Luca visits an Italian town called Portorosso. Basically everyone who lives in the town hunts for sea monsters. While no one is actually killed or hurt, just the idea of it could be unsettling for little ones. There is some brief fighting with harpoons and hand to hand slapping. But there isn’t anything too graphic and no blood is shed.

While there is no profanity used in Luca, there are a few words that you might not want your children repeating. Words include: stupid, idiot, losers, jerk, imbecile, lunatics, shut up, and dumb. There is also a reference to a dead body and being murdered.

There was also some humorous language that made me laugh, such as “Ah, Sharks.” And my personal favorite, “Holy Carp!” I think I might start using that one!

There are no romantic storylines and I’m happy to tell you that Luca’s parents don’t die! Standing ovation, Disney!! However, there is a character who’s father has abandoned him. Children who have experienced a relatable trauma have the potential to be effected.

There is also some bullying in this movie. Bullying is something that kids deal with daily, and how it’s portrayed on screen is important. I feel Luca tackled this issue rather well.

There is a brief moment of betrayal followed by regret. These are hard emotions, but I think it’s important for children to see these characters make mistakes and learn from them.

Luca is a family film and it is clearly meant to be enjoyed by all ages. Its 1 hour 35 minute runtime makes its duration the perfect length for little ones. The storyline is quick paced and I didn’t notice any slow moments where kids could get antsy. I really think they will be absorbed by the colorful landscapes and relatable characters. I would recommend Luca for ages 5 and up…possibly even 4 years old if your child sits well through movies.

Pixar’s Luca is a bright light celebrating the beauty of friendship. It’s about following your dreams and embracing your true self. It’s about trying new things, being brave, falling down, and getting back up. While it might not be my favorite Pixar film, it’s still a wild ride, filled with life lessons, lots of laughs, and a whole lot of heart.  Luca brings so much to the surface and is filled to the gills with brilliant animation. It will bring out the wanderlust in all of us. A perfect film for your family movie night, and conveniently streaming on Disney Plus. Grab an endless bowl of pasta followed by gelato for dessert and watch Luca TODAY!

P.S. Be on the lookout for lots of Easter Eggs!!

Disney and Pixar’s original feature film “Luca” is a coming-of-age story about one young boy experiencing an unforgettable summer filled with gelato, pasta and endless scooter rides. Luca shares these adventures with his newfound best friend, but all the fun is threatened by a deeply-held secret: they are sea monsters from another world just below the water’s surface.

I HOPE YOU FOUND THIS LUCA PARENTS GUIDE AND MOVIE REVIEW HELPFUL FOR YOUR FAMILY. DISNEY AND PIXAR’S LUCA IS NOW SWIMMING ON DISNEY+!

Looking for more movies like this Luca Parents Guide? Check out these popular posts: